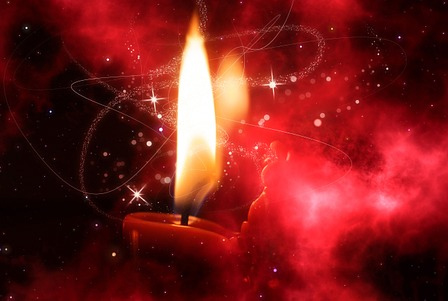 Canadian Messianic Jewish Institute presents “Bereshit (Genesis): The Book of Beginnings – Learning to Walk in the Power of the Patriarchs” 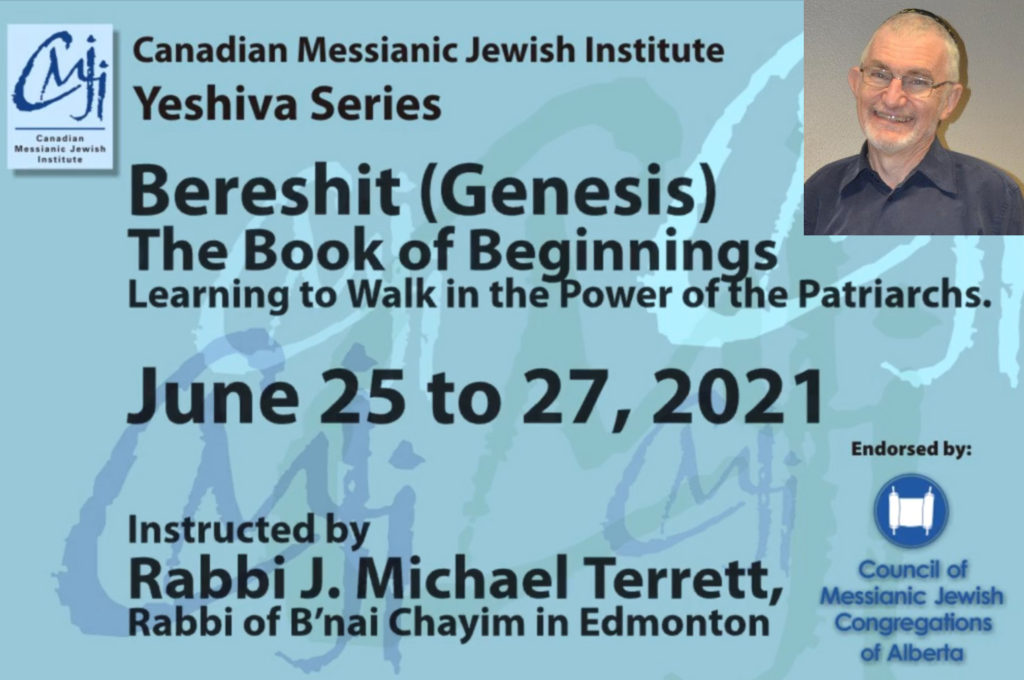 Watch this video about the course: 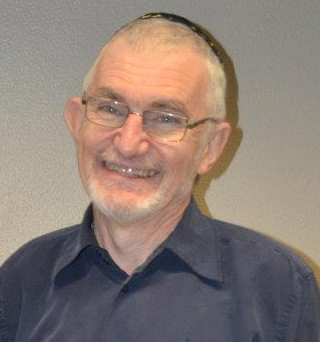 About the instructor:
Rabbi J. Michael Terrett, Rabbi of B’nai Chayim in Edmonton

Michael Terrett came to Canada from Zimbabwe in 1959. He grew up in a secular Jewish home and
in his late teen until his early twenties he began practicing Buddhism. While at the University of Calgary he encountered a Christian group which challenged his confused approach to religion and after a series of encounters with G-d, he surrendered his heart to the Messiah.

Michael went on to seminary and began ministry in 1982. While in Montreal he encountered the Messianic Movement and has been a leader in Messianic congregations since 1996. He is presently Rabbi of the B’nai Chayim congregation in Edmonton and continues to explore how to live as Messianic Jews and Gentiles in a spiritually darkening and morally conflicted world.

Rabbi Mike Terrett has been involved with the Messianic Movement for many years and is a dynamic Bible teacher and speaker. He has been in ministry for over forty years and he has also taught in an adjunct capacity for five different Bible colleges.

As well as being a long time volunteer with the Jewish National Fund of Canada (JNF), He continues to promote the Messianic Movement through such venues as Missionsfest, a variety of Christian schools and from the pulpit of any number of churches.

It is his burden that believers become strongly rooted in the teachings of the Bible and that they learn to be effective in their outreach, both in how they say what they say and in how they live what they believe. 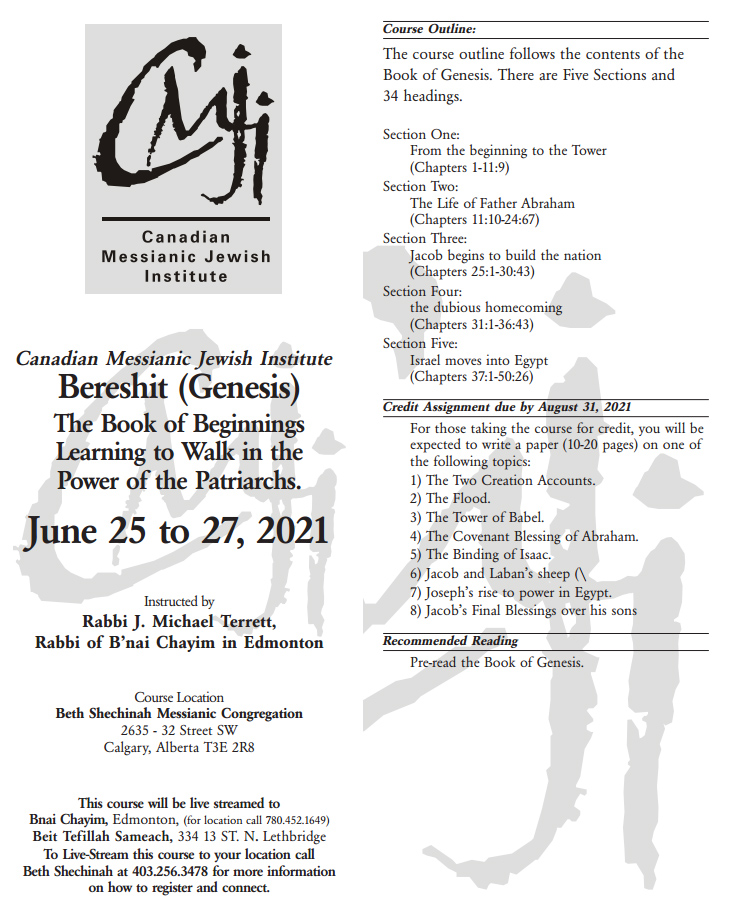 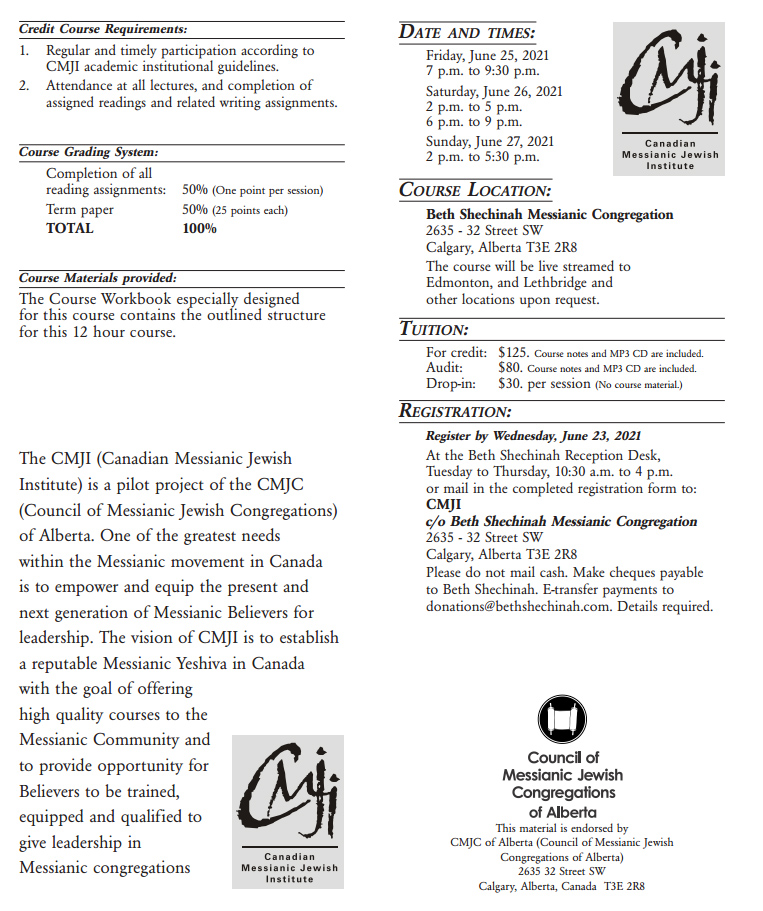 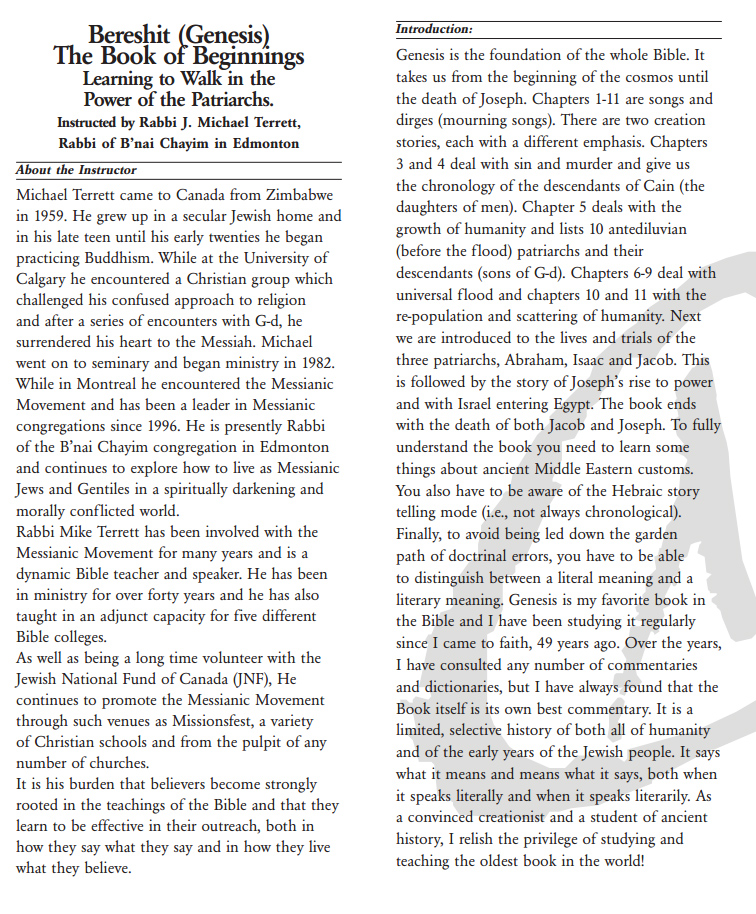 “Genesis is the foundation of the whole Bible. It takes us from the beginning of the cosmos until the death of Joseph. Chapters 1-11 are songs and dirges (mourning songs). There are two creation stories, each with a different emphasis. Chapters 3 and 4 deal with sin and murder and give us the chronology of the descendants of Cain (the daughters of men). Chapter 5 deals with the growth of humanity and lists 10 antediluvian (before the flood) patriarchs and their descendants (sons of G-d). Chapters 6-9 deal with universal flood and chapters 10 and 11 with the re-population and scattering of humanity. Next we are introduced to the lives and trials of the three patriarchs, Abraham, Isaac and Jacob. This is followed by the story of Joseph’s rise to power and with Israel entering Egypt. The book ends with the death of both Jacob and Joseph. To fully understand the book you need to learn some things about ancient Middle Eastern customs.

You also have to be aware of the Hebraic story telling mode (i.e., not always chronological). Finally, to avoid being led down the garden path of doctrinal errors, you have to be able to distinguish between a literal meaning and a literary meaning. Genesis is my favorite book in the Bible and I have been studying it regularly since I came to faith, 49 years ago. Over the years, I have consulted any number of commentaries and dictionaries, but I have always found that the Book itself is its own best commentary. It is a limited, selective history of both all of humanity and of the early years of the Jewish people. It says what it means and means what it says, both when it speaks literally and when it speaks literarily. As a convinced creationist and a student of ancient history, I relish the privilege of studying and teaching the oldest book in the world!”